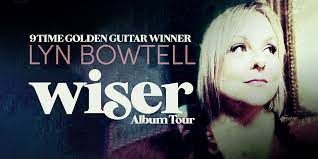 Stunning, heartfelt vocals, beautifully-crafted songs and world-class performances, there are few female voices in Australia to rival the class and style of Lyn Bowtell. Lyn Bowtell, is back on tour with a brand new album! Lyn Bowtell is a Toyota Star Maker winner, MO Award winner, a nine time Golden Guitar winner, and Artistic Director of the CMAA Academy of Country Music.

Fresh from the recording studio with Producer Shane Nicholson at the helm, Lyn is thrilled to share with you the new songs that spearhead her first solo release in nearly four years. She has named the Album Wiser, after a track that reflects the overall feeling of the songs; songs about love, loss, learning and looking towards the future with a better understanding of the past. Lyn says “This album reflects where I’m at and where I’m headed…’Wiser, braver, stronger from now on’.”

Join Lyn and be amongst the first to hear these brilliant new songs by one of the most innovative artists in Australian Country music. Lyn will be joined by special Guest Artists, Duncan Toombs and Liam Kennedy-Clark