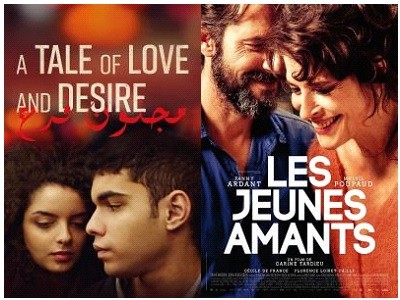 Ahmed (the remarkable Sami Outalbali, Sex Education) is a talented 18-year-old Algerian from the outer Parisian suburbs, who has received a grant to study literature at the prestigious Sorbonne. Though the same city, it’s a disorientingly-foreign world for the conservative Ahmed, and he is rattled by the discovery of a rich canon of ancient, erotic Arabic texts in his new surroundings, works in which he recognises a reflection of his own secret yearnings. Ahmed has been struck by the beautiful Farah (magnetic discovery Zbeida Belhajamor), a vibrant Tunisian student who exudes curiosity and has fully embraced the freedoms and opportunity of studying in a new city. Ahmed is both overwhelmed with desire and afraid to surrender to his impulses… Intelligent and engaging with its themes of identity, courtship and romantic expectations, Bouzid’s thoughtful and surprising fable of young love is a romance with a difference, celebrating passion and curiosity, culture and desire. Starring: Sami Outalbali, Zbeida Belhajamor; Directed by Leyla Bouzid

Elegant, retired architect Shauna (a radiant, never-better Ardant, La Belle Epoque) crosses paths with Pierre (Poupaud), a married oncologist in his 40s, who first made an impression on her in a brief meeting over a decade earlier. Both are drawn to each other, and begin a passionate affair. While Pierre’s family life is soon turned upside down – his wife (de France) incredulous at the age difference – Shauna struggles with feelings she thought well-belonged to the past, and the promise of what may remain… Inspired by real events experienced by the mother of one of Tardieu’s closest friends, the late Sólveig Anspach, this wonderful new film deftly avoids sentimentality, and empathises as equally with those affected by the couple’s unexpected connection as it does with them. Capturing the thrill, guilt and vulnerability of December-May romances, The Young Lovers is a hugely moving call to arms to fully appreciate life, no matter society’s preconceptions. Starring: Fanny Ardant, Melvil Poupaud, Cécile de France, Florence Loiret Caille; Directed by Carine Tardieu