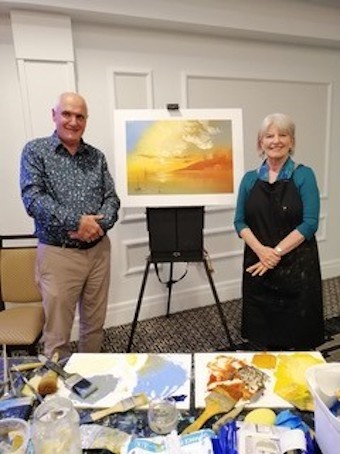 Artist J M W Turner lived at a time of great social and scientific change.  More than anyone else he recorded, in thousands of works of art, the transition of Britain from a rural to an industrial society.  He was a fascinating character – secretive, driven, alternately penny-pinching and generous, chaotic in his private life and fiercely patriotic.  He is rightly regarded as one of the world’s greatest nineteenth century painters.  His likeness appears on the twenty pound note – a tribute that would have appealed to his vanity, but contradicted his need for anonymity.

In 1976 Robert Ketton was appointed as a Lecturer in Theatre at the University of Southern Queensland.  Over the next 33 years he taught acting and directed many plays for the University’s Performance Centre.  Since retirement from USQ in 2009, Robert has worked for GP Connections and Medicare local, also establishing “Floodlight” a federally-funded organisation aiding flood victims.  Robert has a number of published books and plays and is currently working on an illustrated children’s book with his artist wife, Catherine*.

*Whilst Robert talks about the life and times of JMW Turner, Catherine will take to the easel with oil paint, rags, scrapers and brush to give us a glimpse of Turner’s style and technique.